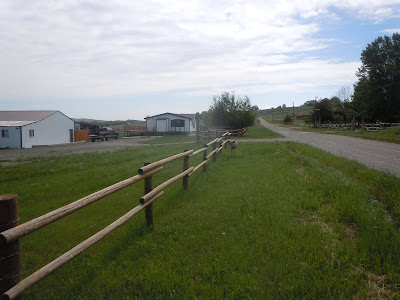 I was lucky enough to experience two extraordinary nature encounters recently.
The other day LC, Jamie, our neighbor Chris and I drove out to the Southfork to check on three horses that are grazing in summer pasture out there.
The drive lasted only for 15 minutes and it was a beautiful day to be out in a beautiful place.
We climbed out of the truck, walked to the fence and looked out to see the three horses standing next to a small shelter at the far end of the pasture.
Before our neighbor could call to the horses we noticed a deer walking towards us on the grass and on our side of the road.
Surprisingly she continued to move closer and soon had moved so close that suddenly the three horses were completely forgotten and all of our attention was focused on the deer.
She continued moving closer still............ 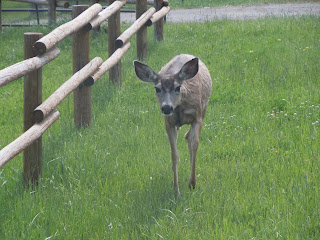 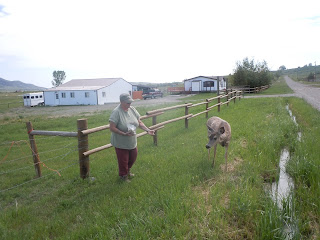 As the deer consistently came towards us we all looked at the deer and then looked at each other, each of us speechless with surprise but at the same time not wanting to talk and scare her away.
I shortened Jamie's leash and pulled her close, unsure of where this encounter was going.............. 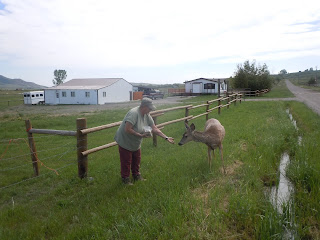 The deer sniffed Chris' hand for a moment and then walked right by her.
And that is when both LC and I realized why she was headed our way.
She was totally focused on Jamie.
I pulled Jamie closer and my dog (who is normally very vocal when she sees deer from the safety of the truck) did not make a sound.
The deer approached us (still completely focused on Jamie) and came within only a few feet of us.
LC moved to stand directly in front of the deer's path and the deer veered around him, looking to catch sight of Jamie again.
She approached Jamie, they touched noses, and then she took a step back.
LC stepped between the deer and Jamie again, and that is when the deer finally began to slowly move away from all of us.
I did not get a picture of the "nose touch".
I wish I had but by the time the deer was right beside us I had completely forgotten about my camera.
Everything was so surreal.
Her quietly walking towards us along the fence line - sniffing Chris' hand - walking up to me and LC and James - sidestepping LC's attempts to block her progress - her focusing so much on Jamie and then approaching and touching my dog's nose.
By the time the deer was standing right beside me and Jamie I was very worried that either the deer would strike out at my dog or that my dog would strike out at the deer.
Nothing of the sort happened from either animal.
The deer wanted to commune with my dog.  She was very gentle.
The only thing we could guess on this very strange (and very wonderful and extraordinary) encounter was that this deer has recently lost or been separated from a fawn.
Jamie is short and brown.
She thought our dog was her fawn.
We could be wrong but nothing else makes sense............... 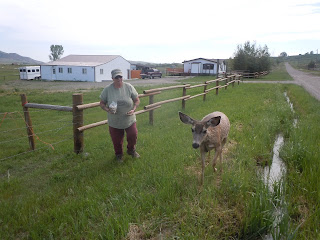 Beginning to move away from us after a wonderful, quiet and extraordinary encounter.
She walked back the way she had come along the grass and along the fence line (limping slightly), wandered into a residential yard and began grazing on their grass.
She was still in the yard when we left this place................ 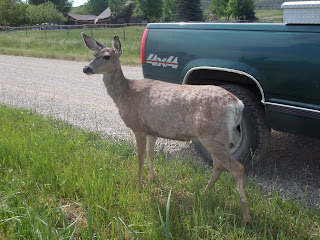 After the quiet amazement of the deer-encounter we all laughed and talked and exchanged surprise.
And then Chris called out to the horses who were still at the far end of the field.
I watched as they raised their heads, looked for a moment and then came running happily towards us.............. 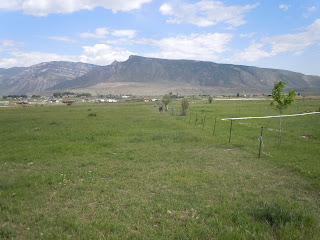 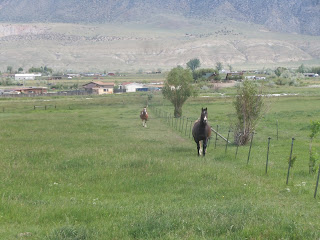 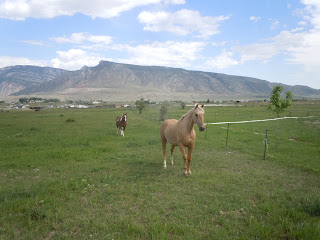 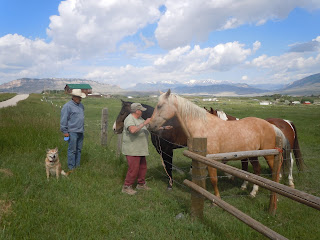 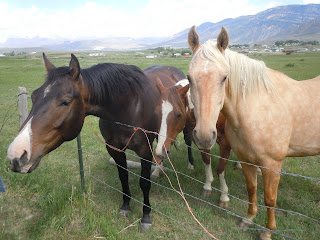 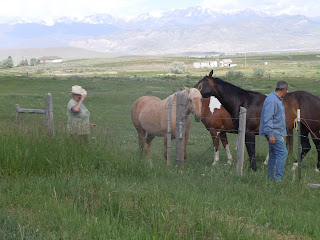 Home sweet camper.
We bought this 1973 Coachman camper yesterday and here it is sitting in the yard.
I have never been in a camper before and know very little about them.
My camping experiences have always been in a tent.
So this is luxury for me.
But it is very necessary.  We live in grizzly bear country and I have no desire to sleep in a tent in grizzly bear country.
http://www.reuters.com/article/2010/07/28/us-usa-bear-attacks-idUSTRE66R5VK20100728
http://billingsgazette.com/news/state-and-regional/wyoming/article_f40ecce6-7b15-11df-aed5-001cc4c03286.html 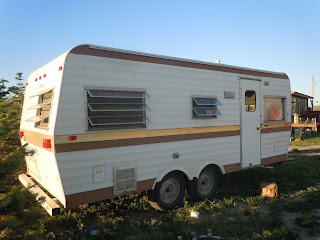 A few days ago I was running on BLM land in back of the house.
I had only been running for a few minutes and was heading up a double track trail towards the hills where I planned on picking up another trail that led back down to a large horse farm the next road over.
I was on the left side of the trail and as I approached I saw it on the right side of the trail and thought "that looks like a snake"
Within moments of that thought crossing my brain I heard the rattle.
Running temporarily forgotten I stopped dead in my tracks for a few moments, in shock that a.........freakin' rattlesnake was curled up on the opposite side of the trail from me.
I did not have my camera with me but truthfully taking a picture of the nasty beast was the last thing on my mind.
I had never seen a rattlesnake before and did not like it.
I knew they were up on BLM land.  Knew that they were out there but this was the first time I had ever seen or heard one and I did not like sharing the same space with it.
Taking a deep breath and giving him a very wide berth I continued on with my run.
The rest of the run was a disconnected and unsettled experience.
I ran again yesterday but stayed on gravel and dirt roads in the neighborhood, eventually working my way down to BLM land at the far end of the road.
I stayed on wide open dirt roads.  Still too unsettled and knowing that freakin' snakes are now on the trails I have spent so much time on these past couple of months.
A lone, large and healthy deer in one of my favorite pastures close to home.
Bright yellow wild flowers, tall and lush green grass and Carter Mountain off in the distance............. 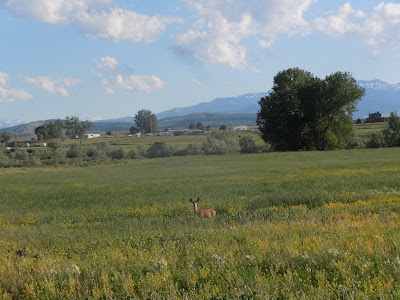 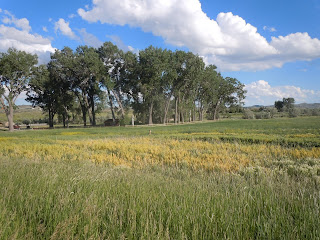 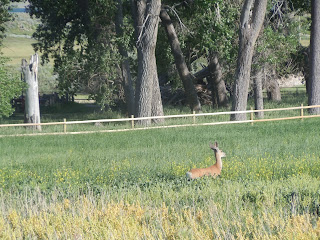 After being out for 30 minutes I found my way down to the irrigation channel and quiet wide open dirt road surrounded by BLM.
I immediately missed being out on trails close to home, spent too much time eating dust stirred up by cars that passed me by on the way to this place, but everything is green and wonderful down this way.
I may just stay with this route for the next few months............... 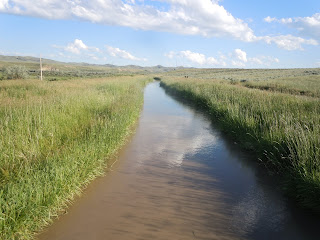 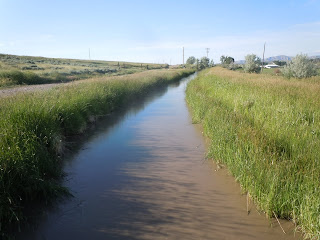 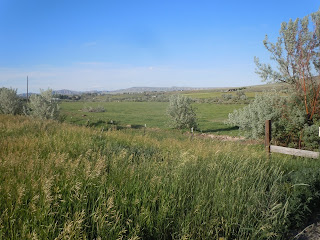 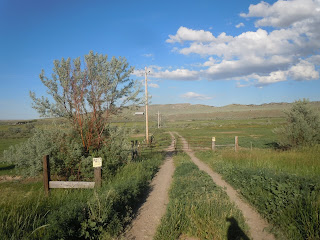 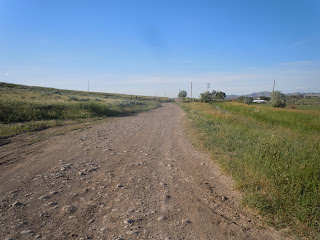 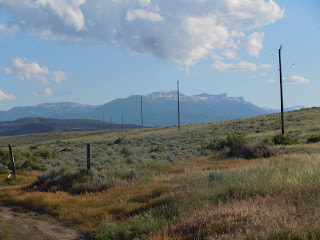 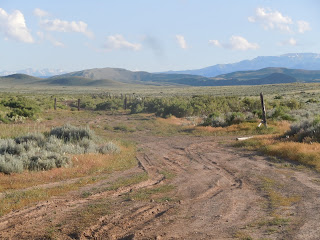 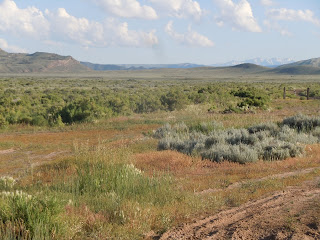 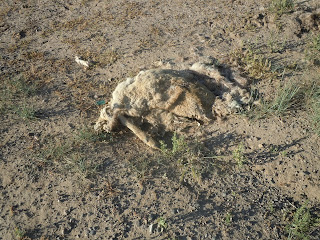 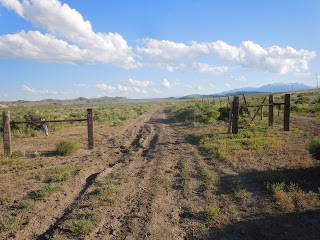 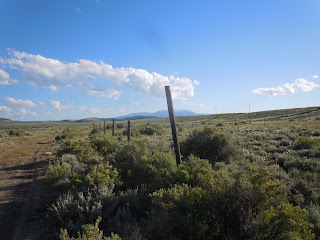 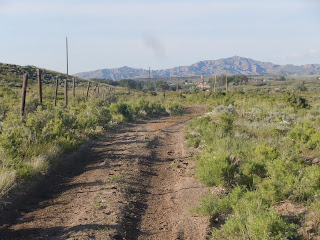 The run was very hot but even though I struggled with the heat, I have found a beautiful area to run in.
I took this picture of Heart Mountain from the road a few minutes from the house, while making my way back........... 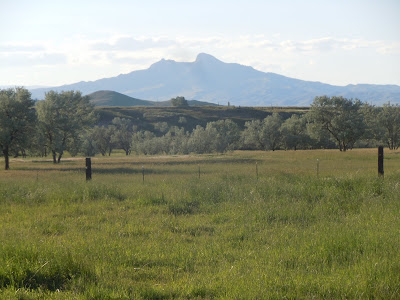 Posted by Living The Adventure at 10:23 PM

Please Sign Up As A Follower Of This Blog